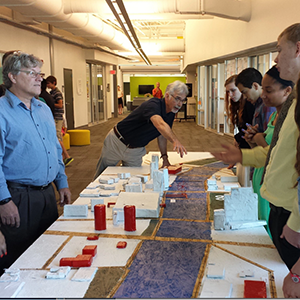 Of all the Essential Project Design Elements in Gold Standard PBL, you could argue it’s “Public Product” that most makes PBL stand out as different from traditional instruction. In some non-PBL classrooms you might find, say, a challenging problem, some degree of authenticity, student voice and choice and even, occasionally, sustained inquiry. But when students make their work public – that is, when it’s seen by people beyond their teacher, classmates, and maybe parents – it probably means a project is happening. (The exception to this is the public nature of traditional exhibitions of student art or peformances in music or drama, which are not "projects" per se.)

Of course, not all so-called “projects” have a public product. Students might just present their work to each other and the teacher, in which case they’re not up to the Gold Standard. Why is having a public product so important? I asked this question to kick off our Hangout on Nov.17, 2015 with BIE National Faculty members Kali Kurdy, Al Summers, and Mike Kaechele.

We agreed that having a public product ups the stakes for students, leading them to do higher quality work. No one wants to look bad in public. When students just turn in their work to the teacher or make a presentation to the class, they (typically) don’t care as much as they do when sharing their work with people from the “real world.” A side benefit of a public product is that it’s good public relations for a school. When parents, community members, or people in the wider world see high-quality student work in a project, they’re impressed. The school’s test scores might tell part of the story, but student work tells more of it.

Another reason to make student work public, which we pointed out in our recent book, is that it becomes “discussible”; other students, teachers, and school/community stakeholders can talk about whether the work meets standards, how it could be improved, and the implications for instruction and a school’s program. The work becomes food for thought in a learning community.

Making Work Public – Not Just at the End of a Project

Al Summers talked about having outside experts involved in projects, noting they can play two roles. During a project, experts can act as advisors and ask students deeper questions to prod their thinking and improve the products they’re creating. He noted, “if you wait until the end, you lose a great opportunity.” At the end of a project, experts can ask students questions during presentations that a teacher or other students might not ask – and preparing for this is a great exercise in critical thinking, as students try to anticipate what the questions will be and how they will answer them.

As an example of making student work public to outside experts, Al described a project in Ohio in which high school students investigated ways to improve water quality in local waterways. The students worked with professionals from the Ohio State University’s Agricultural Extension Agency, as well as farmers and the Lake Improvement Association, to learn, for example, how phosphate runoff during rains could be reduced. The project was extended when a student asked, “Why don’t we do something about it?” which led the class to propose an adopt-a-shoreline program for a local lake. The state of Ohio liked the idea and created signage for the program. (The outline for this project is available at bie.org.)

Al gave another example of a project designed by high school math teachers in Indiana, in which students learned about areas of irregular shapes and scale modeling by designing restaurants. During project workdays, architects and restaurant owners with the Indiana Restaurant Association acted as expert advisors to the students – even including a vice president of the Applebee’s restaurant chain, “on their dime.” Al said that the involvement of experts was not overwhelming to students or the teachers, since “one connection led to another, like in the PBL inquiry process.”

Mike Kaechele, who teaches at Kent Innovation High in Grand Rapids, Michigan, shared two projects with powerful examples of public products. His sophomores in “The Water Project” (which Mike describes on his blog), which integrated social studies, chemistry, and geometry, learned that plans were being made to restore the “rapids” to the Grand River by tearing down and lowering dams. The students studied ecological effects on native and invasive plants species, considered public relations issues, and proposed redesigns for downtown Grand Rapids to take advantage of the expected changes in the river. The final product was intended to be a 3D model – but once the students began contacting and working with outside groups and experts, they took ownership of the project and decided to add more products: a website, posters, and a Google Earth overlaid map of the changes.

Students made their work-in-progress public by developing it with input from the experts they contacted; their products were not just on display at the end of the project, although they did make enthusiastic final presentations to guest experts. One key lesson Mike draws from this experience is that “having students connect with local community partners can actually be more beneficial than teachers sometimes. It is harder for businesses and community partners to say no to kids.”

Mike also designed the “MyParty Election Project” which has now gone national. Students learn about U.S. history, politics and government, and build ELA skills, by creating their own new political parties who compete for voters in an election. During the project, students make their work public by connecting with students from other schools via Skype for critique protocols. They create campaign commercials and upload them to YouTube, give stump speeches to local politicians and others in the field such as campaign managers, and conduct a national debate through Google Hangouts.

Kali Kurdy told about a project with the driving question, “Should rural Idaho be saved?” that demonstrates how “kids just step up to the plate” when they make their work public. Students contacted the state Departments of Commerce and Agriculture to get data, which they interpreted with help from an instructor at the College of Idaho who visited their classroom. The project culminated when students presented their conclusions at the Idaho Council of Industry’s annual meeting. “When you see a young kid who hardly ever says a word telling a group of industry specialists that one community he researched didn’t deserve to be saved, and they had multiple questions and he fielded them with such expertise… It was such a proud moment for us and him.”

My last question was about typical challenges teachers might face when designing and implementing projects with a public product, and what tips our guests would offer. One challenge, they said, is having the courage to contact outside experts and organizations to work with students – although as noted above, students themselves are often the best ones to make these calls. Schools and districts can help teachers and students in this task by forming partnerships with outside organizations and local businesses. Another challenge is preparing experts to work with students, or preparing audience members for student presentations; make sure they understand the project, know their role, and are coached on how to talk with students or ask them questions so they know what’s expected and appropriate.

Mike offered encouragement to teachers who might think that every project requires “a big showcase – that should not be the end goal of every project; sometimes having a few experts do real critique of student work is more powerful."

There’s one final benefit to having a public product: the proud moment when students present their work to the “real world” is often a memory they will keep for the rest of their lives. We like to say PBL is transformative for students; you can bet that was true for the young people in the projects highlighted above.