(Update: On May 18, another shooting took the lives of 9 students and one teacher at Santa Fe High School in Texas. Student body population = 1500.)

I passed by my local high school here in California on Friday, Feb. 16 and noticed a gathering of people holding candles to mark the tragedy of the mass shooting at Marjory Stoneman Douglas High School in Parkland, Florida two days before. It was mostly students, and they left words and images in chalk on the sidewalk, shown in the image at right. In today’s local paper I read a story about students at other schools in the county and around the nation taking action on gun violence. There’s nothing like a hot topic in the news to generate engaging projects.

The students in Parkland who are advocating for policies to increase school safety are modeling the elements of Project Based Learning. They’re asking questions and conducting inquiry into an authentic issue. They’re learning important content knowledge about government and law, and building success skills by collaborating, thinking critically, solving problems, communicating ideas, and showing creativity. Obviously they’re exercising voice and choice, and wow do they have a public audience, from the media to the American people to members of Congress. 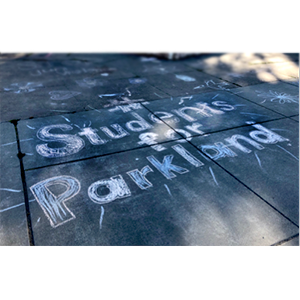 PBL teachers might already be planning projects about the issues raised by the shooting in Parkland. Here are a few thoughts I’d offer:

If you are passionate about a topic, activity, or issue and can legitimately tie it to your curriculum, great. That creates enthusiasm that can light up a project. But be careful about making a project your own crusade, for example a political or social issue. Some students (and parents) may resent it if they feel like they’re being enlisted in someone else’s cause.

The Problem with Large High Schools

In following the news I noted the size of Marjory Stoneman Douglas High School: over 3000 students. Columbine High School in 1999 had almost 2000 students. The shooters in these places were alienated young men. In schools of that size, how many students are well known by the adults there? Not many. How can teachers know and care for their students when they might see 150 or more a day in five or six classes on a 50-minute bell schedule? They can’t. The size and structure of the factory-model high school is part of the problem. (And in addition to overall size, pedagogy matters too; teachers typically get to know their students better when they use methods like PBL compared to the whole-class lecture approach.)

Ted Sizer, author of Horace’s Compromise and other books about the need for a different kind of school, listed “Personalization” as one of the Common Principles of the Coalition of Essential Schools. By that he did not mean a computer giving a student the right level of worksheet; he meant adults knowing students well enough to be able to respond to their individual needs and interests. Sizer recommended that one high school or middle school teacher should be responsible for no more than 80 students. The school restructuring movement in the late 80s-early 90s, followed by the small schools movement in the 2000s, likewise advocated for knowing students as individuals by reducing the size of a high school to 400-500 students (or creating schools-within-a-school or academies). Most charter schools today are no larger than that.

If a student is known well, and feels that a teacher cares about them, they can be pushed as a learner, which Lisa Delpit explains as the “warm demander” approach. Instructional methods like PBL are easier for teachers to implement when they know their students well enough to design engaging projects with them, have fewer of them to coach and fewer logistical challenges--and longer class periods, another common feature of smaller schools.

Moreover, students who are known well won’t be as likely to fall between the cracks. They can get emotional support as well as academic. They are less likely to be alienated from their peers. I believe they would be less likely to take their anger out on their school. Reducing the size of high schools is not a cure-all and won’t stop every Parkland and Columbine from happening, but let’s make the idea part of the conversation.