At the Buck Institute for Education, we’ve been keeping a list of the many types of “_____ - based learning” we have run across over the years.

and our new fave…

Let’s try to sort this out.

The term “project learning” derives from the work of John Dewey and dates back to William Kilpatrick, who first used the term in 1918. At BIE, we see Project Based Learning as a broad category, which as long as there is an extended “project” at the heart of it, could take several forms or be a combination of: 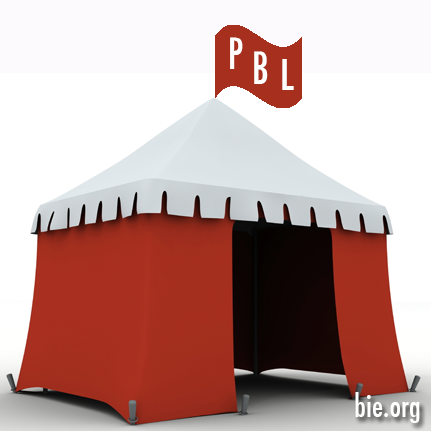 So according to our “big tent” model of PBL, all of the newer “X-BLs” – problem-, challenge-, and design-based – are basically modern versions of the same concept. They feature, to varying degrees, all of BIE’s Gold Standard PBL Essential Project Design Elements, although each has its own distinct flavor. (And btw, each of these three, and Project Based Learning, fall under the general category of inquiry-based learning – which also includes research papers, scientific investigations, Socratic Seminars or other text-based discussions, etc.).

Other X-BLs are so named because they use a specific context for learning, such as a particular place or type of activity. They may contain “projects” within them, or have some of the Essential Elements, but not necessarily. For example, within a community- or service-based learning experience, students may plan and conduct a project that improves their local community or helps the people in it, but they may also do other activities that are not part of a project. Conversely, students may learn content and skills via a game-based or work-based program that does not involve anything like what we would call a PBL-style project.

Because they have the same acronym, we get a lot of questions about the similarities and differences between the two PBLs. We even had questions ourselves; some years ago we created units for high school economics and government that we called “problem based” because they used realistic but simulated problem scenarios. But we later changed the name to “Project Based Economics” and “Project Based Government” to eliminate confusion about which PBL it was.

We decided to think of Problem Based Learning as a subset of Project Based Learning; that is, one of the ways a teacher could frame a project is “to solve a problem.” But Problem-BL does have its own adherents, history and set of typically-followed procedures, which are more formally observed than in other types of X-based learning. The use of case studies and simulations as “problems” dates back to medical schools in the 1960s, and Problem-BL is still more often seen in the post-secondary world than in K-12, where Project-BL is more common.

If you’re a Project-BL teacher this probably looks pretty familiar, even though the process goes by different names. Other than the framing and the more formalized steps in Problem-BL, there’s really not much conceptual difference between the two PBLs – it’s more a question of style and scope: 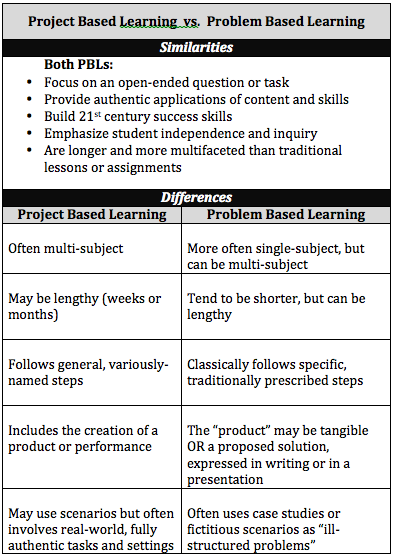 A note on math and the two PBLs: Teachers at some schools in the K-12 world that use Project-BL as a primary instructional method, such as the New Tech Network and Envision Schools, have begun saying they use Problem-BL for math. Especially at the secondary level, teaching math primarily through multi-disciplinary projects has proved challenging. (Not that occasional multi-disciplinary projects including math are a bad idea!) By using Problem-BL, these teachers feel they can design single-subject math projects – aka “problems” which are still complex, open-ended, realistic scenarios – that effectively teach more math content by being more limited in scope than many typical Project-BL units are. Tackling a “problem” may, for example, not involve as much independent student inquiry, nor the creation of a complex product for presentation to a public audience.

So how does this Tale of Two PBLs end?

One could argue that completing any type of project involves solving a problem. If students are investigating an issue, like, say, immigration policy, the problem is deciding where they stand on it and how to communicate their views to a particular audience in a video. Or if students are building a new play structure for a playground, the problem is how to build it properly, given the wants and needs of users and various constraints. Or even if they're writing stories for a book to be published about the driving question, “When do we grow up?” the problem is how to express a unique, rich answer to the question.

The semantics aren’t worth worrying about, for very long anyway. The two PBLs are really two sides of the same coin. What type of PBL you decide to call your, er… extended learning experience just depends on how you frame it. The bottom line is the same: both PBLs can powerfully engage and effectively teach your students!