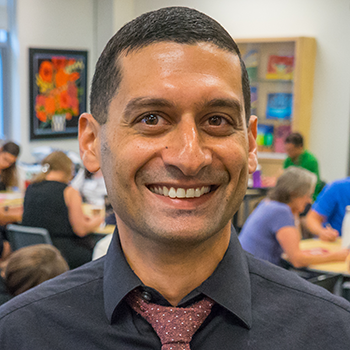 My education story starts in a small suburb outside Miami where I was raised and where after college, I began teaching math at the local high school. This was just before the passage of NCLB, but Florida was already heavily invested in testing schemes, and my classroom was one of the earlier groups of young adults to feel the punitive effects of testing (the punishment was being in my classroom). In a new teacher's act of desperation, I abandoned the set curriculum and began focusing on what was interesting, and what provoked curiosity and inquiry. This was well received by the students in my community, but not the adults. So I left.

I was fortunate to land at High Tech High in San Diego, where I would focus on teaching as a craft. I went on to became a founding staff member of two different charter schools focusing on engaging and relevant pedagogy for first-generation college-bound students including PBL, performance assessments, and college readiness portfolios. In these schools I taught math, science, and digital arts to mainstream (detracked) classes in both suburban and urban environments. In addition, I've taught at two independent high schools in San Francisco, teaching physics to juniors and seniors as well as co-directing a two-trimester senior capstone project.

A few years ago, I left the classroom to pursue a PhD in education at UC Berkeley. During this time, in addition to my studies, I have taught graduate courses at the university, supervised and coached student teachers during their practice teaching, and recently I have returned to teaching physics part-time (because some itches just need to be scratched).