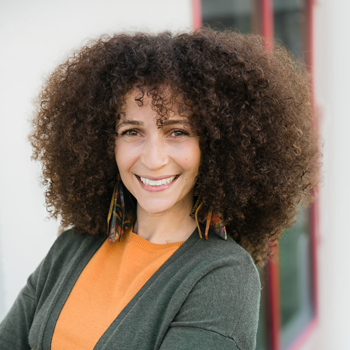 Laureen joined BIE in September 2017 as Curriculum and Project Manager.

Laureen began her teaching career as a New York City Teaching Fellow where she worked at a South Bronx middle school teaching 7-8 English and Social Studies.  By her third year teaching, she became a founding teacher in a small school when the middle school building split.  It was there that she learned about Project Based Learning and began working with the leadership team to develop PBL curriculum for the English department.  After several years in New York, she moved to Oakland, CA and started working as a high school English teacher with Envision Schools. Laureen taught English (9-12) and served as a Lead Teacher.

Working with underserved students of color in communities that experienced high rates of trauma deeply influenced Laureen's decision to pursue a Ph.D and conduct research on urban teacher preparation and resilience, teacher student relationships, and the role of love in social justice education.  While working on her doctoral degree, Laureen served as faculty for Claremont Graduate University's Teacher Education Program and as an instructional coach and Assistant Principal at a PBL 6-12 school for the arts.  Most recently, Laureen has worked as adjunct faculty for CGU and as an independent consultant.

Laureen received B.A.s in African/African American Studies and English from UC Davis. She earned a M.S. in English Education from Lehman College (CUNY). She also earned a Master of Arts in Education and a Ph.D in Education with an emphasis on Teaching, Learning, and Culture and an African Studies Certificate from Claremont Graduate University.